Regarding your email: I personally wouldn't touch discord with a 10ft pole given their track record. But I hope you're able to get a community together. :)

Thank you CalAlaera for your response, ill work on making look nicer lol.

Managed to pick up the game on sale, made some kind of bonus

There's no indication of how many mines are on a map.

There's no indication of how many mines remain on a map.

There's no first-click protection.  That is, you'll have to restart seven or eight times because your starting click will reveal a mine and end the game.

I do like the background, though.  It's nicely done.  And the forced reliance on memory makes the puzzle interesting.

Also, when in fullscreen mode, clicks aren't registered correctly at the left and right edges of the grid.  That is, if I click near the edge of one square (but still inside the blue square), the game thinks I clicked the next square over.  It's still somehow enjoyable, though.

thanks for review, ill make sure to fix the stuff i can nwhen i get back to minesweeper if i ever do ( moved on to a pixel art top down styled game from september 2021 i  had in my old files)

ur review might not be 5*Stars, but the review itself in its quality is. Thank you,

You juste use logic and memory, im sorry i couldnt have that flag system integrated 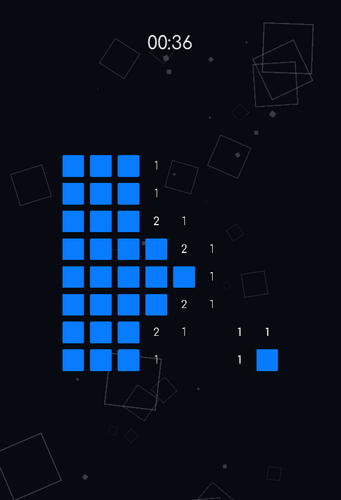